St. Anna’s Church was originally established, under the direction of The Rev. Francis Lister Hawks, Christ Church rector, by the Rev. Mr. Charles W. Whitall as St. Peter’s Seaman’s Bethel and began April 19, 1846. Mr. Whitall was ordained to the priesthood on November 2, 1846 by The Right Rev. Leonidas Polk first Bishop of Louisiana.

From her inception St. Peter’s, later named St. Anna’s, was a  congregation with social justice as an expression of spirituality. St. Anna’s was the first “free church” in New Orleans (not charging pew fees) with open seating for all, some seats being reserved for seamen.

Because there was no other church in the area for English-speaking people and because the church school was very popular, there was pressure to organize St. Peter’s into a parish. A site was purchased in 1849 and a chapel was completed. This arrangement as a mission church remained until St. Anna’s was granted parish status in 1869.

In 1857 after a series of rectors, The Rev. Amos D. McCoy became St. Peter’s rector. McCoy and Deacon John Francis Girault established an orphanage during the yellow fever epidemic of 1860 which remained in operation until 1940. During the Civil War McCoy refused to say prayers for the President of the United States; New Orleans was occupied by Federal Troops under the direction of Gen. Butler. The congregation was, under Federal mandate, disbanded and McCoy arrested. In 1863 he was banished by military order from New Orleans. A lay reader took his place being appointed by a Union-vestry. When Gen. Polk was killed in battle in 1864, Deacon Anthony Vallas agreed to say the prayer for the U. S. President and St. Peter’s resumed services in the summer of 1864.

In 1867, Deacon Girault became rector of St. Peter’s. The last service of St. Peter’s on Esplanade and the river front was October, 1869. The chapel and property were sold and two lots further down Esplanade Ave. were purchased. Dr. Newton Mercer gave $10,000 for the building of a frame church on that site. The new church was named St. Anna’s after the mother of the Blessed Virgin Mary and the deceased daughter of Dr. Mercer. In 1876 the frame church was burned and on September 2, 1877 a brick church was completed.

St. Anna’s is considered an Anglo-Catholic church and has followed this tradition for many years. The

Rev. Dr. Hunter became Rector during the late 19th century and brought with him  Anglo Catholic piety as part of the Ritualist Movement. In 1890, the rules of order were changed requiring the clergy to march in vestments in procession into the church. The placing of lighted candles on the altar at St. Anna’s brought forth a denunciatory letter from parishioners of the strongly evangelical St. James Parish of Alexandria, Louisiana in 1895.

St. Anna’s endured many difficult years after the 1890’s. The church was ravaged by tornado in 1915. A disaffected Rector sued the congregation for $18,000 in 1923 forcing it back into mission status. The Rev. Arthur Price nursed the mission back to health and in 1947 St. Anna’s once again was in parish status.

In 1948 city engineers ordered the old church dismantled due to termite damage, water damage, and disrepair. In 1951 the new rector The Rev. Louis Parker set up temporary quarters nearby and by 1952 the current church was completed. The current church was dedicated by The Rt. Rev. Girault Jones, a nephew of St. Anna’s long time Deacon and Rector Francis Girault. After Fr. Parker’s work was done  he was followed by  very capable priests such as The Rev. Robert John Dodwell who was priest for 25 years (for more information go to www.dodwellhouse.org). The current church retains antebellum  pews along with many of the memorial plaques of earlier churches. She boasts fine stained glass windows and other original works of sacred art such as the Christus Rex done by acclaimed artist Gene Seidenburg. 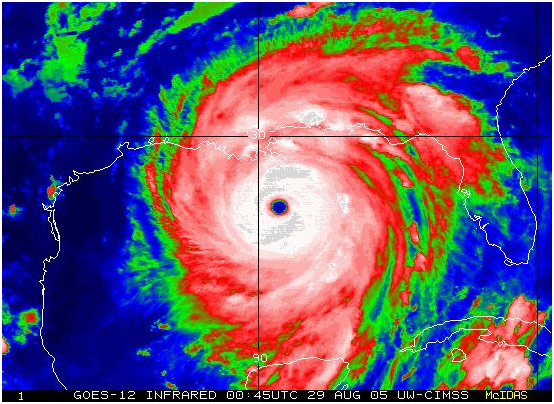 St. Anna’s is located in a part of the city that touches upon several historic neighborhoods. Each neighborhood is distinct and was impacted differently by Katrina. The Tremé, our immediate neighborhood, received flooding, wind damage, and vast displacement of long time residents The French Quarter and Marigny, within blocks of St. Anna’s, has rebuilt and restored what was and is an icon of the city’s efforts to “renew and restore”; we are a resilient people. The St. Roch, 7th Ward, and Upper 9th Ward, neighborhoods still struggle to rebuild and repopulate having been a generally very poor part of the city that was profoundly flooded. The Bywater, un-flooded, is growing and is considered by many to be “the last bohemian paradise.” 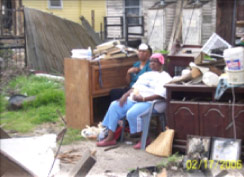 During the dramatic days following Katrina St. Anna’s found itself as one of the un-flooded bastions of hope. Clothing, water, and immediate medical aid were dispensed with great regularity. The city, and indeed this church, was trying to find its compass in the midst of chaos. In our own Genesis story a new creation was birthed and not in a vacuum but in collaboration with a dozen churches from around the U.S.A., and beyond that, a legion of volunteers. That collaboration and emphasis on attending to the needs of others was the corner stone of St. Anna’s as a missionary outpost in the midst of disaster crafted by the hands and prayers of many. 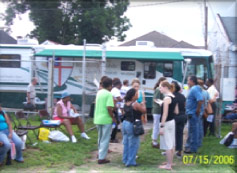 From this new sense of service was birthed the first of what would become five principal missions of St. Anna’s Church which has indelibly identified us as one of the most active outreach churches in the United States. St. Anna’s Mobile Medical Mission, the first of the four, was the result of a vision of collaborators and supporters and the selfless act of a dedicated nurse whose own home was flooded, Ms. Diana Meyers, RN. It offered  free medical care, health screenings, and health education including Medical Navigation empowering underserved populations. 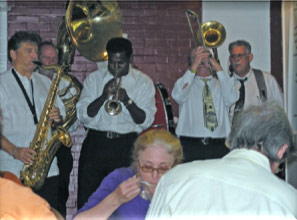 The next mission was in response to the need for people to hear the music and to gain some sense that our very culture was not lost; we responded to the spiritual needs of our community in collaboration with the New Orleans Musicians Clinic, the director, Ms. Bethany Bultman quipped, “to keep the music playing.” From this was birthed the Mission to Musicians (M2M) which  provided a forum for some of New Orleans finest musicians to offer our unique art form to visiting volunteer mission groups. In the early days of M2M St. Anna’s was one of the only venues to listen to New Orleans music, receive a good meal, and to receive spiritual and medical support. Among some of the musical greats that have played this venue are: The entire Boutte family; Germaine Bassel; Kermit Ruffins; Sunpie Barns; Al “Carnival Time” Johnson; Tremé Brass; Zydepunks; over 300 checks issued to local musicians and over 6,000 plates of food served. 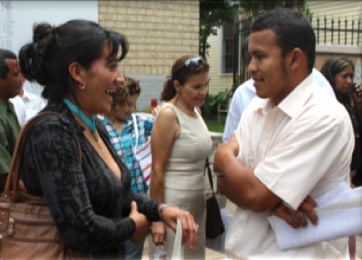 During the early days of the disaster New Orleans invited and needed skilled labor to rebuild roofs, houses, and remove debris. The result was a large influx of immigrant labor largely from Central America. Yet, New Orleans offered little if any support for this new labor force that was helping us to rebuild our city. A dedicated and passionate woman named Jamie McDaniel asked us to house an English as a Second Language (ESL) class at St. Anna’s. Less than a dozen students started the class. In time the Diocese of Louisiana offered seed funding for this mission that had grown to meet the needs of several dozen Latinos. By the end of 2009 the mission originally named Latino Apostolate had become much more than ESL classes but a true community. The work reaches out and advocates for Latinos; seeks to enculturated them and assist them to become prosperous self reliant members of New Orleans. The students have thought so much of the mission that they voted to rename it, “Oportunidades NOLA” or [Place of] Opportunity in New Orleans. The program ran from 2007 until 2012 when it was spun off to The Latino Farmers Co-Op. 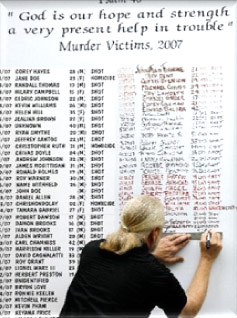 During the time following Hurricane Katrina poverty continued to be epidemic; ranking #1 in the USA for urban blight and with the largest displacement of a population in U.S. history including tax base and business bases crime became a by-product. The city lacked resources to address these issues in so many ways. The infra-structure for police, medical care, schools, and city services was not only disrupted but in some cases destroyed. In 2007 New Orleans was ranked as the #1 city for murders in the United States. We had to do something; that response was crafted by a deacon in training, The Rev. Elaine Clements. The response was the ‘Rose Ministry’ and ‘Murder Board’ which sought to humanize this urban holocaust. Eventually this ministry would receive national attention and become a spokesperson for the victims of violence in New Orleans. Since that time, with over 100 murders per year, the Murder Board has birthed pro active community responses in Horns for Guns a gun buy- back program that sought to channel youth into arts programs. H4G in turn resulted in St. Anna’s at-risk youth program, Anna’s Arts for Kids. This ministry continues and by 2018 we have listed over 3,000 names. A proposed art installation memorializing this loss has been proposed by Artist Joel Dyer in 2019 and funding is being sought.

*Anna’s Arts for Kids (Now Anna’s Place NOLA) was founded under the direction of a devoted and highly qualified community activist and arts professional Mr. Darryl Durham. The basic idea is to follow the model of the Harlem School of Art which Mr. Durham was a past CEO of. Beyond reaching out to at-risk children and offering them art expression the program sought to become a cultural bridge between Latino and African-American community. St. Anna’s sought to offer a sense of self worth, self discipline, and appropriate social responses to challenges. Community partners included Loyola University, The New Orleans Opera, Tulane University, New Orleans Musicians Clinic, New Orleans Arts Council and others.

By 2010 St. Anna’s Church, in response to the missionary activity, averaged a 30% per year growth. It now offers a fully funded Sunday School for children; hosts one or more adult Christian Education Classes at any one time; and Confirmed 18 persons in 2010. St. Anna’s Church, after Katrina, can rightfully claim to be actively working out the Kingdom of God in community. The church continues to grow and to develop new ways for the congregation to engage in “Kingdom” work. We remain dedicated as a missionary church in the city.

*SEE LINK FOR ANNA’S PLACE NOLA for where the original program has gone and how it is growing. https://annasplacenola.org/