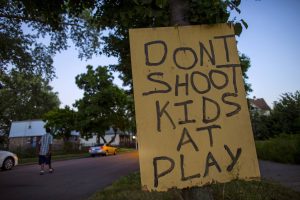 Musings upon Gun Ownership in the United States by the Very Rev. Bill Terry+

The United States has a unique and historic love affair with firearms. It is part of our national mythology. Yet, we seem to be increasingly less interested in common sense approaches to what is a national pandemic of violent firearm related killings. Both mass shootings as well as more localized homicides have been dramatically increasing. The nation is polarizing and in that polarization is a paralysis of common sense and good judgement. Even, considering the “Heller decision” Justices noted in the majority opinion that the right to bear arms was not unqualified.

My own daughter took her own life in a rash and spontaneous moment of deep depression. She reached next to her, in the presence of her lover, and in an instant took her own life using an automatic pistol with a chambered round. Could it have been prevented, perhaps? Perhaps simply having the gun not chambered would have helped. Perhaps having the clip alongside of and not in the gun would have helped. Perhaps a red flag ordinance preventing them from owning a weapon would have helped. After all they lived in a low crime semi-rural area. Perhaps. The national conversation on so called gun control in personal to me. 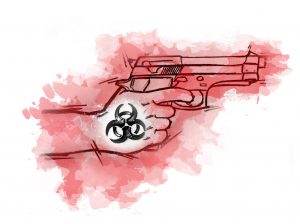 responsibilities that should and must come with gun ownership. It makes no sense to me for our citizens to own “assault rifles” let alone sell so called bump stocks or expanded magazines. To what end must we posses these weapons and their accoutrements? Some data indicates that millions of lives have been saved because of gun ownership in the U.S. However, that data is flawed and was not cultivated using any scientific measure and was clearly published as misinformation. The closest scientific study indicates that less than 1% of all violent crime is prevented by gun ownership. [Hemenway D, Solnick SJ.  The epidemiology of self-defense gun use: Evidence from the National Crime Victimization Surveys 2007-2011.  Preventive Medicine.  2015; 79: 22-27.]

So, if gun ownership is not showing its worth, given scientific data, why are we so enamored with it? I believe that it goes back to the American myth of and history of gun ownership and possession. Yet, even, as stated, the Supreme Court held that there are restrains on this Bill of Rights as all of the Rights are restrained.

” Although we do not undertake an exhaustive historical analysis today of the full scope of the Second Amendment, nothing in our opinion should be taken to cast doubt on longstanding prohibitions on the possession of firearms by felons and the mentally ill, or laws forbidding the carrying of firearms in sensitive places such as schools and government buildings, or laws imposing conditions and qualifications on the commercial sale of arms.” Justice Antonin Scalia in Heller vs. The District of Columbia June 26, 2008. This was a 5-4 decision and it divided the Supreme Court

As stated the Rights are not unrestrained.

“Freedom of speech is limited: you cannot shout “fire” in a crowded theater, cannot use speech meant to “incite an immediate breach of the peace” or to incite an imminent lawless action, obscenity and child pornography are limited (although subject to subjective standards) and deliberately “false statements of fact” are restricted.

Limitations on freedom of the press recognize that a principal may review and suppress articles for the school newspaper given that the newspaper was funded by the school and published in its name.

The freedom of assembly is guaranteed, even for purposes of protest, but limited in the name of the public good. Gatherings posing immediate threats to public safety can be prohibited or stopped.”

The point is that virtually every one of the Bill of Rights has common sense restrictions that provide for the general welfare and public safety of its citizens. “Rights” are not limitless.

It is, perhaps, too much to ask Americans to give up their arms. We currently have 120 guns per every 100 citizens. The Supreme Court upholds the individual right to bear arms. Yet, the 1938 National Firearms Act sought to curtail ownership of machine guns as well as the use of silencers which was supported by the NRA. So there is some history on common sense restraint in the ownership and use of certain firearms.

According to the CDC Louisiana ranks second in all gun related deaths at 26.3 per 100K of population. The United States in 2016 ranked 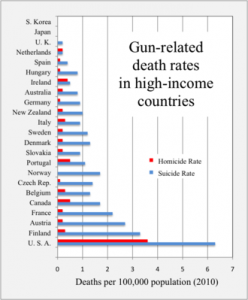 According to a 2021 Gallup Poll 52% of Americans want more strict gun control. While 32% want to maintain the status quo. According to the CDC the leading cause of all deaths for adolescents and children (ages 1-19) is gun death having surpassed auto accidents as the leading childhood killer.

For all of this information and data are key to any reasoned measure of gun safety measures. Yet, the CDC is prohibited from any intense study of the effects of gun violence via a small amendment to the national budget funding bill and it is called “The Dickey Amendment.” In summary:

“Led by Representative Jay Dickey of Arkansas, they (Congress) added a provision to a 1996 spending bill declaring that “[n]one of the funds made available in this title may be used, in whole or in part, to advocate or promote gun control.”2 Congress also stipulated that $2.6 million of the CDC’s budget, which was the amount spent on firearm injury research during the previous year, would be specifically earmarked for research on traumatic brain injuries.” That Act has been added to the funding bill every year since. The state of the Dickey Amendment to date:

“On March 21, 2018, Congressional negotiators reached a deal on an Omnibus continuing resolution. The $1.3 trillion spending agreement also includes language that codified Health and Human Services Secretary Alex Azar’s interpretation of the Dickey Rider in testimony on February 18, 2018, before the US House Energy and Commerce Subcommittee. While the amendment itself remains, the language in a report accompanying the Omnibus spending bill clarifies that the Centers for Disease Control and Prevention can indeed conduct research into gun violence but cannot use government appropriated funds to specifically advocate for gun control. The bill included no funding earmarked for gun safety and was signed into law by U.S. President Donald J. Trump on March 23, 2018.

The fiscal year 2020 federal budget included $25 million for the CDC and NIH to research reducing gun-related deaths and injuries, the first such funding since 1996.” CREDIT WIKIPEDIA

We need solid scientific data. The sort of data that the CDC developed around car death and injury and the introduction of seat belt laws which dramatically reduced auto mortality and catastrophic injury rates.

The American Medical Association posited in 2016 that gun death was a national health crisis and reaffirmed that belief in the wake of the Uvalde mass shooting. Further they have provided for several tiers of interventions and suggested laws which include but are not limited to:  comprehensive background checks; mandatory waiting periods; physician counseling and interventions; gun safety education and others.

It is now beyond time and common sense to claim so tenaciously the “God given right to have and bear arms” in an unrestrained and unreasonable manner. As for me, a priest of the church, God did not give us this Right. The framers of the Bill of Rights negotiated this Right; the Supreme Court adjudicated this Right. God had nothing to do with it. In fact, one wonders how we can be so bold as to even come close to making that claim considering the theory that the Second Amendment was crafted in order to suppress slave rebellions by Virginia legislators. That theory, I might add, has historic merit. Every gun murder, mass or otherwise, should be personal.

Over the past several decades the clarion call that “they are coming to take our guns away” has yet to materialize and I suspect that it never will.

“Few firearms can be described as truly revolutionary and even fewer revolutionary firearms become one of the best rifles in the world, with dozens of military forces around the globe using variations of the same design. One such firearm is the AR15, which was developed in the late 1950s and early 1960s as the new rifle for the United States military, replacing the M1 and M14 rifles, both of which fired 30 caliber bullets. The AR15 was chambered with a new type of ammo, called 223 Remington or 5.56 NATO.” AMMOFORSALE.com

When will we finally put the value of human life, of our life as a community, in our children’s lives above that of “truly revolutionary” firearms that seem to serve little protective civilian use and indeed have led to some of the most horrific mass shootings in our modern history? Legislate now: honest and comprehensive background checks, waiting periods for AR and automatic pistols, raise the age to 21 for any firearm sale including ammunition, perhaps encourage “Red Flag Laws” on the local level. Yes, harden school security but equally start to really fund access

to therapeutic services. Perhaps consider evaluating the “benefits” and “services” offered as “mental health” access in private insurance. There is a lot even more than I mentioned that can be done that is based in common sense and still upholds the spirit of the Second Amendment as interpreted. [As a footnote I do not agree with the mythology of the Second Amendment nor of the Courts opinion but that is not important – I am a pragmatist.] Do SOMETHING!