All or most churches find themselves very busy just before Christmas. For many it is a time decorate and perhaps change the look of the church. It is a time to invite people to your church to worship. Many preachers will prepare sanguine sermons that lean into the sentimentality of Christmas Season. Most preachers will know that there will be many who come only once or twice a year and this is our shot at making an impression. It is a busy time of year for almost everyone. There is an almost pitched frenzy that starts after Thanksgiving and in New Orleans runs all the way into Ash Wednesday. Even then “ya gotta get yer ashes.”

Saint Anna’s is no different. Even today December 23rd we/I am anticipating the final touches on our church dressing herself in adornments. The choir has rehearsed and we anticipate great music. We have advertised and let people know about our worship times. It is what we do every year. In fact I am very blessed this year because I will host two clergy on Christmas day; one to celebrate mass and one to preach. I do so look forward to being with them on this day. So, there is some hope in this season. I want to say sometimes that we live in Advent: hope, anticipation, wonder, and yearning. Yet, Christmas is about incarnation. It is about our creator joining us on our journey. More importantly experiencing what we experience – both tragic and exalted. How strange how odd that sounds but it is what we believe.

I find this idea of incarnation in  bits and pieces around this church. I find it all of the time. The idea of “incarnation” is transferrable. We say and believe that we can be the incarnation of Jesus, at least in bits, by how we behave and what we do. All of it counts.

Darryl, some of you may know, is the founder of Anna’s Place NOLA. An arts and educational enrichment program for children who really need some support. He is an excellent musician and classically trained. His credentials are strong for the work that he is called to do. But, what he does that is extra is where we find this idea of incarnation.

I looked from my office balcony a few days ago. There was Darryl jamming bags of gifts, bicycles, toys and clothing into the church van. He was going to homes, apartments, tenements all around the city. He was traveling to where the children of Anna’s Place live. No eggnog would greet him at a door. In fact one family was afraid of answering the door; we don’t know why. But, when some of the parents received these bags, in his words, “you could see a sense of relief wash over them.” This Christmas has toys. For some that is answered prayer. For some of our families the choice is rent, heat, or toys. For those that are privileged the answer may seem obvious but it isn’t. It is an incredibly hard choice. It involves self respect and a sense of dignity.

In a society that is absolutely consumer driven (we are breaking buying records this year) one dignity rests, regrettably,  too often on what we own and how it looks. So, even in the economically poorest communities self esteem and pride are conditioned by what is owned. So, Christmas gifts do become difficult choices for those that have to make those choices. We always want the best for our children.

But Darryl was the messenger, the Santa figure, the one who went out alone and delivered those bags of dignity. His colleague Wendi did likewise. Wendi in fact, sorted those gifts by age and gender, by child and name. She provided that work to three or four wonderful women who came and wrapped the presents with care. Nothing sloppy only the best. Because, who doesn’t like tearing away that paper to see what surprise is inside? Only the best wrapping possible. Colorful, great ribbons and bows. Packaging in itself becomes part of the story. Some of those Christmas elves gave up time from work. Amazing.

But, how did the packages and toys, and bicycles and balls get to St. Anna’s? No, we did not buy them. No, a rich uncle did not write a check. People gave them and gave them usually with a bit of joy. They knew where the gifts would be headed. At St. Anna’s we call them community partners because we all, in our tribe, seem to care. Much, if not most, of those toys and gifts came from local bars and pubs and social organization in the LGBTQ+ community. Gift givers with names like The Leathermen, The Lords of Leather, Winter Wonderland, The Phoenix, Mags, Princess Stephanie and yes Trinity Episcopal Church. Each giving with just a bit of hope and joy which travels it’s way to a home…a family.

This is a bit of an annual thing. It takes time energy and effort. Yet, here we are. But even the smallest thing represents the Incarnational movement of humanity. Musicians have been hard pressed these past two years to make a living. We have longed for music as well. Saint Anna’s was blessed with two concert series: French Quarter Fest’s Holiday New Orleans Style on Saturdays and Down in the Treme by the Electric Yat Quartet and Andre Bohren. People came and received the gift of live music and it was a joy. Again, Darryl Durham captured those opportunities noting that there are fewer venues for live music in the historic Treme. Bring the music back was his calling card. It worked out wonderfully. 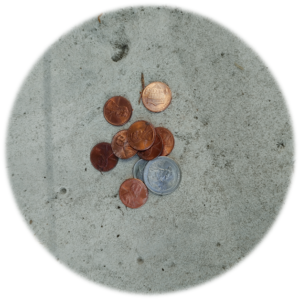 As I was leaving the last of those concerts I looked down on the steps leading to the church doors. There on the top step were a few coins all laid out. An offering of what someone had to give that had rested on those steps. I marveled and wondered and that is what I choose to believe. So, while sometimes I may think that the world lives in Advent, my experience tells me that we are a Christmas people living in and with and reflecting The Incarnation. That is how we are at our best. Emmanuel.