How can we forget this horror? On this very day July 20, 2021 as we prepare for a Feast Day of our Patron this horror becomes present again. In searching the archives the story unfolds that a relative of the family shot them. It is a grim and very sad story. The family of four were laid to rest on Good Friday of that year. I remember this account vividly. Sometimes you try to forget but the stories get stuck in your memory. Just so, this is but one story that surfaces when the work that God has called you to do is “The Murder Board.”

I remember strolling on a lovely spring day in Robert Louisiana at the Episcopal Church Conference Center with a colleague from an Uptown church. It was a lovely day and the “Murder Board” had gained some notice in the press. This colleague asked, “Do you really think that the Murder Board does any good?” I remember then as I do now being a surprised with this question. How could a tableau of the victims of violence not have power (I am not sure the word “good” is not really appropriate)? The first victim on that board was named Corey Hays who was killed January 1, 2007. When a photo of the Board appeared in the Times Picayune several of the survivors of violence called the church. It was a very rainy Friday in the summer. The last person to come and to see the board and to speak with me that day was Corey Hays’ mother. I will never forget her solemn lament, “I didn’t think nobody cared about my baby. I tried so hard. Thank you because I thought that everyone didn’t care about Corey.” On that day I, as pastor of this lovely church, promised “We will never forget Corey. We will continue to make sure nobody else’s baby is forgotten.” 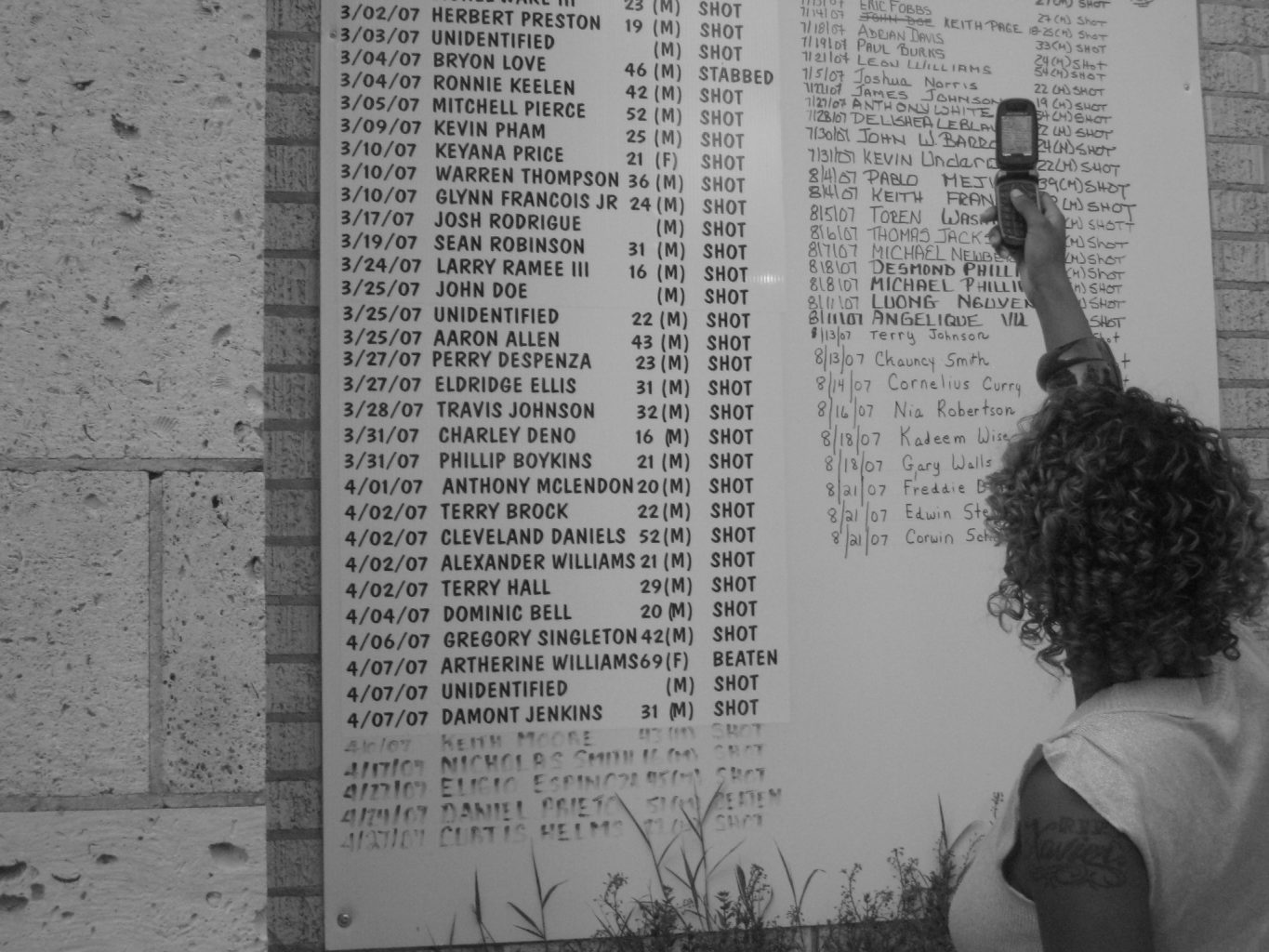 Somewhere along the line, I think it was in 2015, someone asked me how long we intended to keep listing the murder victims. It is a good question and one that begs for an answer that I really don’t have. My response then was, “So long as the murders are so rampant we will keep it up. When we are in the bottom five in homicides maybe we’ll stop.” It is now 2021 and we have been doing this work for 14 years  and the insanity of New Orleans homegrown urban violence continues. It ebbs and flows over the years but it remains an unimaginable cross for us to bear. It is so unimaginable that too many of our people have become numb to the violence; it has become just a part of life in the Crescent City. But the work quietly goes on. As for us the names and stories are dug up each day or week. As for us a black marker jots date, name, and type of death on a cheap coroplast board. Eventually and aspirationally we hope to make a “permanent” memorial that will stand in silent reminder of the massive loss of life sustained by our city for a decade or more.

This is hard work and for each of the people who spent a part of their lives chronicling each death, each homicide, each human story. The first was Deacon Elaine Clements who eventually was forced to pass it along because of her disaster relief work. But I know that it took a toll. After a time this work came to Vicki Terry my wife. She diligently not only did the research but would carefully cut out the stories so that we had faces along with the names. She managed to maintain albums representing each of the four years that she did the work. Eventually, the quiet and undetected trauma of that work forced her to pass the work along to others. A few did it briefly but eventually it ended up on Deacon Luigi Mandile’s desk.

Today he walked into my office and said, “I just need a break. How can people do this?” He was referring to the dark and depraved world that too often is the world of our chroniclers. Here is what today looked like:

We talked about the trauma that cannot help but slough off onto us as we do this work. It is hard work. In fact our church has had the honor to host a few seminarians each summer. Part of their spiritual formation at Saint Anna’s is to write the victims names on our Murder Board each week. They have all said that it was a solemn and holy work. Each Sunday each of the names of these victims will be read in our faith community at public worship. We will also pray for the families, responders, and perpetrators involved in these murders. Why? Because that is what we do.

This violence is so pernicious and enduring that a wonderful artist has presented an idea to our church which we have embraced. Our outdoor sign space is becoming limited. His concept is called “Stargazers.” Each victim will be represented by a star. Those stars, in gold, will be fixed on the ceiling of the church. In turn a computer pad will identify the victim on a grid so that each star remains unique and therefore remembers just that person who will become part of a larger community of victims and those that come to bear witness in this place.  We have yet to raise the necessary funds but we hope that we can someday.

In the meantime we continue, endlessly, to write date, name, age, and violent end to too many of our community. In the Gospel according to Luke I am mindful of Simon the Cyrene who was “seized” and made to carry the cross for the beaten Jesus. In too many ways we are that same Simon, seized by our compassion and care for the world, that we are forced to carry this cross. “What good will it do?” she asked. It surely is a source of trauma to all who come close to this ministry. Maybe nothing will come of it but to help a mother, a brother, a sister, a family know that their baby matter. If that is the least that this does it is a cross worth taking up. If it is a stark reminder to our community of the profound loss that we are experiencing, even if for a moment, then it is a cross worth taking up. If it actually can be a graphic horrifying totem that gives some energy to change the forces that result in this violence then it is certainly a cross worth taking up.

We pray to the crucified God who said, “If anyone would come after me, let him deny himself and take up his cross daily and follow me.”