Saint Anna's Episcopal Church New Orleans > Father Terry's Blog > “I am not living my dream, I am living in God’s dream for me” 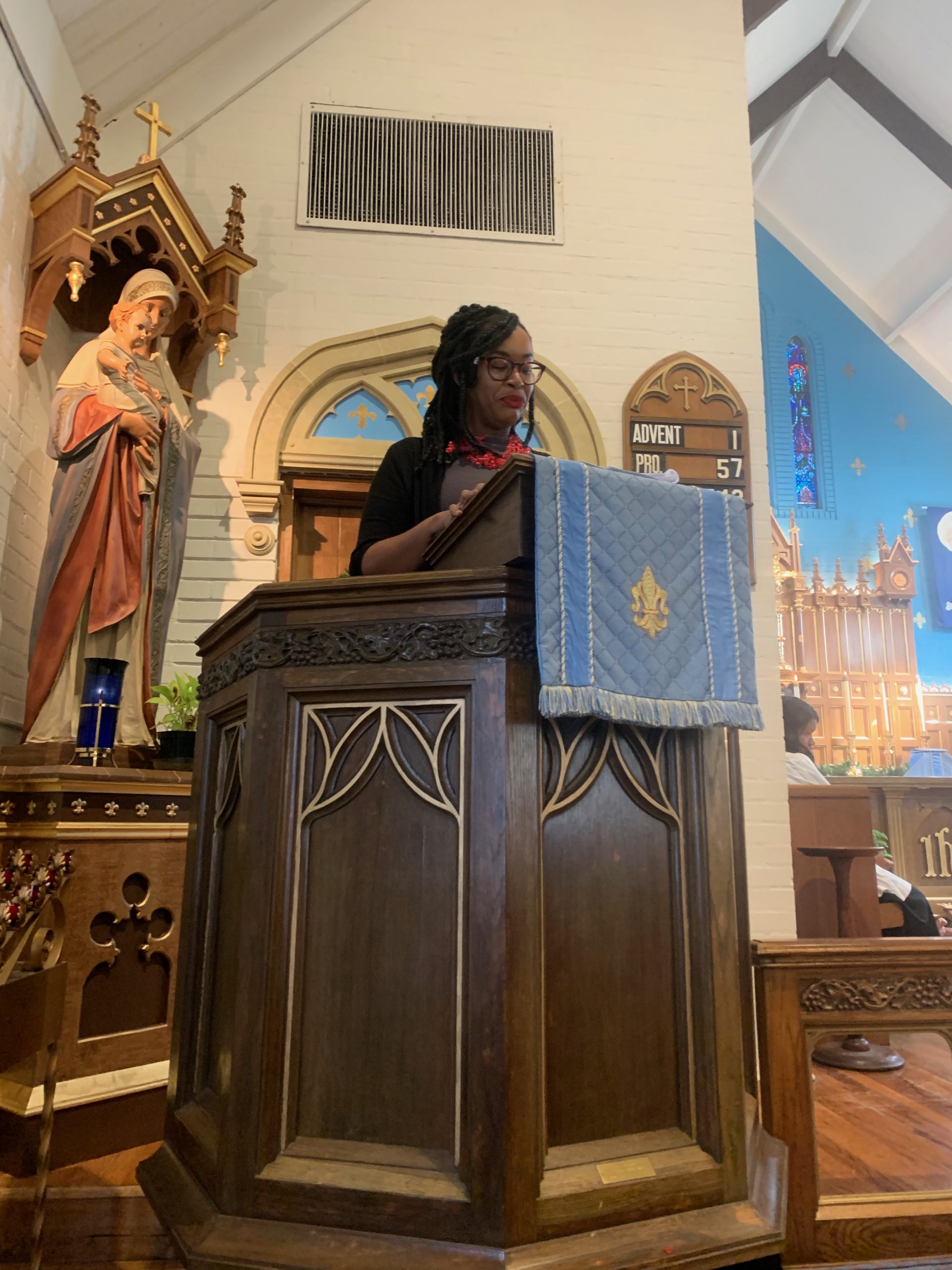 Anna’s Place Sunday was a special mass falling during the Season of Advent. It would include children singing secular songs, African drums in procession, Blessing of Anna’s Place Faculty and an array of extraordinary pieces of what is our liturgy for that day. Why? Because Anna’s Place is a robust place doing remarkable and important work. More, it has been a thought, an idea, something that St. Anna’s does. But for many who worship here it was just that, a thought, something good that “we” did. So much was shared on this particular Sunday. We now have ownership and relationship with this very important program. When asked how this all fit into the Season of Advent, “If Advent is in some way about hope and expectancy then nothing more expresses Advent than Anna’s Place NOLA.

The following is the address to the congregation offered by Ms. Brianna Carr, Director, Anna’s Place NOLA.

When Fr. Bill asked me to speak today on this second Sunday of advent, I was nervous. As I have been visiting St. Anna’s services for a few months  I thought to myself, what inspiring words could I say to such an altruistic audience. I was given the advice to speak from my heart and think back to the moment that I was offered my position at Anna’s Place. I then began thinking about that moment and the moments in my life that have led me to this pulpit today. I will begin with Isiah “He shall not judge by what his eyes see, or decide by what his ears hear; but with righteousness he shall judge the poor, and decide with equity for the meek of the earth;” Since I am not a preacher I ask you to be patient with me as I explain though my life what this means. My first thought was to a memory of my sixth grade self sitting in a classroom during math. It was almost time for summer and I was focused on being placed in the advanced seventh grade math class, I worked hard in a class of about 20 students of which only five were black. Afterschool I spent my nights studying away and when it was time for parent teacher conferences, I just knew my teacher would have my mother recommend me for the advanced class.

I was invited by my teacher to sit in on the conference with my mom, which I just knew was an indicator that I had made it. As I sat there across from my teacher, next to my mother I was bouncing with excitement. My teacher looked up from her paper and I could not wait for her to tell my mom how hard I had been working, and I just knew my mother was going to be so proud of me. My teacher looked at my mother blankly and said, “ While Brianna’s grades are good, I do not feel like she would be well suited for the advanced class.” I became flushed with embarrassment as my mother asked, “Why?”. In my head I was screaming “Why?” I had been working so hard and my teacher huffed, “Well, honestly, when I call on Brianna in class she gives me attitude, she will say things like “I didn’t raise my hand” or “ Can’t you call on someone else.” My mother looked at me confused. Slowly I started sinking in my chair, disheartened, embarrassed, and confused. I was always willing to answer questions, I was always prepared for class, I had no idea what my teacher was talking about, but she must be right she, was my teacher. My mother nodded her head and we left. The next day in math class, I was still mulling over the parent teacher conference. I still had no idea what my teacher was talking about. As the bell rang and we settled in class, my teacher asked everyone to pull out their homework from the previous night. My Teacher asked “Who wants to answer number one?” She peered slowly around the room and pointed to Aiyisha, another girl in my class, Aiyisha, without even looking up said, “I didn’t raise my hand.” My teacher rolled her eyes and moved on to the student next to Aiyisha. That’s when I realized, my teacher had no idea who I was. In a class with only five other students that looked like me I was invisible, Aiyisha was invisible or maybe we were just shining so bright she couldn’t tell the difference.

Instances like this followed me throughout highschool and on to college. Fear when I applied to anything was a constant presence, fear of not being accepted only because my skin was a different color. When I was in highschool I got my first job pushing carts at a local grocery store. I wanted badly to be promoted to cashier, I worked hard and made it to the self checkout.

Then one day the managers at the store asked me to have a meeting in the office.. I sat at a large table with 5 managers and my fifteen year old self. One of my favorite managers began by saying, “ We are so sorry that you have to come here Miss. Carr. However, you were spotted leaving the freezer and we believe that you may have been engaged in inappropriate behavior.” I was baffled and replied, “I think there has been a mistake. It definitely was not me.” I saw the looks of disbelief on the faces of all the managers at the table, some smiling and shaking their heads. Before I could finish, the manager replied “ Unfortunately, we are going to have to let you go.” I was dumbfounded, I was upset. I left their offices walking home crying. Not from embarrassment, but from anxiety. “How was I going to help my mom? How was I going to afford college?” The next day the grocery store called me and said they would move my termination to a suspension (following a review of the video tapes, and a visit from my mother who is my biggest advocate after myself) they were unsure I was the young lady in the video. At the time I was ecstatic. I would get my job back, I would be able to continue to save for school. I returned to work a week later (a full week without pay).

I had been punished for something I did not do, caused stress, and made to feel like it was a privilege for me to be back at work. I knew this was wrong, but for some reason, all the managers acted as if this was ok, no apology, no explanation. Maybe this was ok. Or, I thought, maybe this needed to change. I learned later they had mistaken me for another employee, who surprisingly was white, and who, surprisingly did not lose her job and surprise again she did not get suspended, must have been pretty bad lighting.

I grew into adulthood and found myself working with youth and their families. The more I did, the more I discovered moments like mine are not just moments. They are narratives. These narratives are embedded in our society, in our culture. They act as a virus telling us lies and beggetting cultural norms like oppression, racism, sexism, homophobia, xenophobia. But, like anything narratives can change. It is my belief that change starts as soon as you decide it does.  generation that is going to inherit this earth when we are gone, speaking life and truth to them so they can change the way they speak to themselves when the world tries to tell them what they are worth. I began volunteering at Anna’s Place 3 months after I started my master’s program . The first person I met was Ms. Diana Meyers, who interviewed me. I remember entering her office and I felt the amazing energy of love she had for St. Anna’s and Anna’s Place, her smile made me feel comforted (and now I need it all the time.)

The next person I met was Mr. Darryl, who’s eyes light up as soon as he starts talking about any and I mean any child at Anna’s Place from their accomplishments to their challenges the pride and care he feels for them is infectious. Then I met Mrs. Jyulene, who has the most compassionate soul and immense love for the kids, (even when they are chirping her name all over the building). The next people I met where my small reading group, which consisted of 3 smart, powerful, and no-non-sense 9 year olds that just knew Miss. Bri was already loving everything about them. I stopped volunteering to focus on school but, missed Anna’s Place greatly.  So my last semester of school I applied to an open position and was excited to see the faces of Juleyne and Diana again at my interview. And as I sat and still sit with with them,minus Juylene plus Darrly, Father, Luigi, and my numero uno Te’Era I am never nervous not even excited I feel like I am home amongst friends trying to undo and bring light so many unjust systems in our society. And as I look around today I am so happy to see Anna’s Place youth here and so amazed by what this small but mighty organization has created. When I was offered this position at Anna’s Place Father Terry said I squealed with excitement and if you’ve been around me for a significant amount of time this is not uncommon. I think back to that moment and I believed I was living my dream, but to quote a woman who has changed the world for black people “I am not living my dream, I am living in God’s dream for me.”