A Community within Communities Gretchen’s essay.

Because I have a free rein to write what I want I generally try to honor this by offering thoughts and reflections on our community. This article will expand our community to include our pets. During our last pet blessing a couple of weeks ago we so enjoyed this community of furry barks, howls, and hounds. In each case as the “owner” approached with their friend one could easily see a kinship between pet and “owner.” I say owner but really they are simply friends.

Saint Aelred of Rievaulx (1110-1167 English) said, “Friendship is that virtue by which spirits are bound by ties of love and sweetness and out of many are made one.” I cannot think of any truer statement than this to reflect furry friendship.

It was a bright and cool day about six years ago at a pet blessing. There amongst the gathered was a remarkable dog. Long fur, elegant to the eye. She 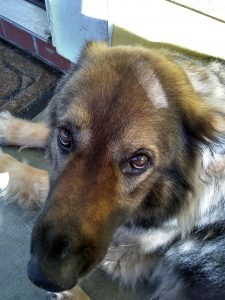 was a long haired German Shepherd in tow with a rescue lady named Keane. She was brought for a blessing before receiving heartworm treatment. Such treatment is hard on any dog because essentially arsenic injections. As Kean walked out Gretchen showed an abundance of playful affection towards me. She was astounding to see such a magnificent animal. I told Kean that I’d be interested in being a forever home. After which I promptly forgot about it.

About eight weeks later I got a phone call. “Well Fr. Terry Gretchen is ready to meet you and for me to see if you’d make a good home for her. Can I bring her up to church?” I jumped at the opportunity but I kind of forgot to tell my wife about all of this. So, in a few short days Luigi my friend and parish admin. called Vicki up saying you have got to come to church to meet a German visitor. Vicki promptly came up and with wagging tail and such deep affection Gretchen found her forever home in just a moment of time.

In a recent email exchange Kean said this, “She touched me in such a special way. She is THE sweetest most gentle dog.  Everyone from St. Anna’s knew and loved Her, she is famous at your church. As you know, she had been so mistreated and had basically given up when she was found.  Took a bit to get her physically up to strength but she never lost her faith in people.    That is something always amazing to me about dogs, their ability to forgive.  However, as much as she loved all people,  she had such a special bond with you.  It was love at first sight and she never looked back. ” 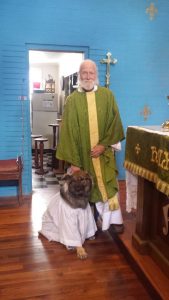 It is true that Gretchen is a very special dog. It is also true that she became “the church dog.” Gretchen would join us for noon day mass settling in behind the altar. If it was a Wednesday evening mass she would lay down on the side after greeting everyone with her presence. She spent many days with me in my office and as we walked out at the end of the day she was at her best!

Her best was to wander among about thirty very high strung, very loud, very jumpy inner city kids. It is Anna’s Place and the kids are always tuned up. Yet, as she walked through the crowd she would slow and let these kids run up to her and pet her. Some were nervous others simply gleeful. Several of the kids called our “is she a wolf-dog?” Yet, by the time she and I reached the kitchen exit the kids were noticeably quieted and felt a sense of kinship to the dog and to a sense of peace. That is Gretchen. “THE sweetest most gentle dog.” So, yes, Gretchen is the church dog. But, I don’t want you to think that she is a church lady that looks down on our festive city. No Gretchen has frequented The PUB, The Golden Lantern (of Stanley fame), Mags, and The Phoenix.  Gretchen always found a quiet spot, usually in a main walk way, and settled down. She is very fond of the cold cement floors in most of our bars. She is always up for a sniff and “kiss.” Yes, she usually sniffs inappropriately but hey, then she knows you and loves you all the more.

Do Dogs have a soul?

Beyond her social engagement Gretchen was a soulful source of contemplative expressions. I was once asked during a TV interview if dogs had a soul? 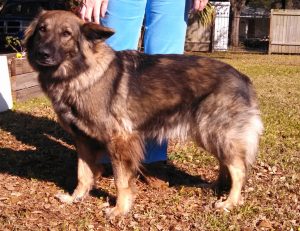 St. Augustine said, “the eyes are the windows of the soul.” When I look into Gretchen’s deep dark brown eyes I see life, a soul, that is rich with gratitude and love. Scientifically it is believed that when a dog sees their human friend each every time the neurotransmitters fire off in the exact same way that two people in love experience when they look at each other. Both science and intuition say yes dogs have a soul. This dog this friend of mine is deep and rich in her companionship. Every time I sit on the porch she curls up next to my chair. When I use the sink in the morning, she curls up at my feet; when I dress she is curled up under the dresser; when I am due to come home she stands by the gate or a window waiting for her friend to return. As St. Aelred said, “out of many are one.” Such is the sweet spiritual friendship that I have found in Gretchen. But not only me, she has freely given her love and affection to the patrons of all of those bars, she has readily given her peace to rowdy children who have found her peace, she has so often given her quiet confidence to people who worship on weekdays. That is Gretchen the Church Dog.

It has been a rough Fall for us. We have helped two of our friends, Betsey the Shih Tzu and Heidi the Shepherd,  cross the rainbow bridge. Now it will soon be Gretchen’s time because she was just diagnosed with Canine Osteosarcoma which is an aggressive cancer of the bone that spreads quickly. So, soon she and I and all of those that she has touched will part company but we will always remember her. Comfort measures are being aggressively given because when she still looks up it is not in pain but in the pleasure of the company that surrounds her. But soon it will be time.

This article is an essay not just about Gretchen but about our human condition. Should we not all behave like Gretchen – free to love freely? This essay is a reflection of all of the people who have furry friends. Each fur baby adopts her people. Yes, they will look at you and in them you will see true unconditional love. So, to all of the people and all of the furry friends, “God saw all that he had made and it was good.” More than good it was perfection (at least in a dog’s life).

OUR FUR BABIES THAT HAVE OR WILL

Frolic in the heavenly puppy park 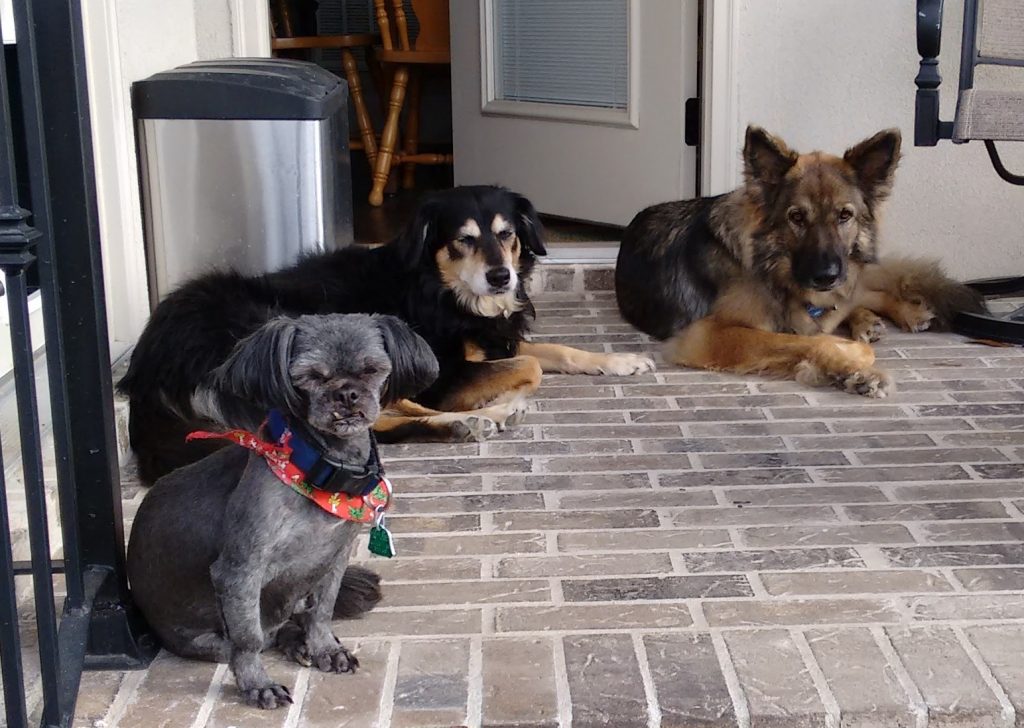