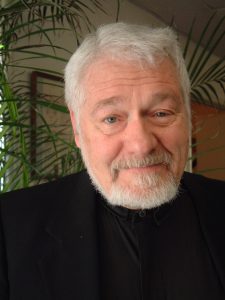 THE REV. DANIEL  B. HANNA passed away on Wednesday May 22nd in the early hours at Lambeth  House/St. Anna’s nursing home. He was visited yesterday by many friends and the prayers for the dying were administered. He was anointed and given absolution. All rituals that Dan is very fond of and deeply believed in. I am writing this not as an obituary per se but rather as a reflection upon a dear friend and fellow cleric.

Fr. Dan came to St. Anna’s looking for what he called “a Catholic Church.” His passion was traditional Anglo Catholicism. He was fond of saying that when he got his first cure he disobeyed his Bishop and used the Anglican Missal to say mass. He’d say such with a sly smile and a sparkle in his eyes. That church was in Upstate New York. Eventually, he found himself in Illinois not as a priest but working for Government. He was a director of a county community services agency handling child and family welfare issues.  Eventually, he retired and moved to New Orleans. He subsequently found St. Anna’s and I am sure it was the smoke (incense) that grafted him on to our little congregation. That was before hurricane Katrina. On October 6, 2004 he was licensed by the Diocese of Louisiana as a recognized priest in this Diocese able to perform his sacramental duties.

All of the foregoing are life details said only to give some context. Now here is the Dan that was known and loved:

In 2004 I had only been at St. Anna’s for a year. I was a rookie. So, Dan myself and a couple of others began meeting weekly for prayer, bible study, and mentoring. I would moan and groan and ask advice and Dan and a man by the name of Bill Memmott would give me advice and support. Dan’s mantra during those sessions was “I am a Catholic Father” he would say with force! He railed against all things that would somehow, in his opinion of which he had plenty, lower the mass and the performance of a priest. “I am Catholic Father” he would say. He said so even a couple of weeks ago when we shared communion together. He was fierce in his devotions to high mass and liturgical ritual. So much so that we once got in a tiff over it.

After Katrina, when we were no more than maybe 40 worshiping members, one of ours had a very serious medical issue. After being released from hospital he returned to church with deep breathing issues. It was the start of Lent. So, thinking Lent as a time of austerity, and mindful of our dear friend with breathing issues I elected to forego incense during the mass for the Season of Lent. WELL! That would not do. Dan made that very clear. He despised anything that would lower the glorification of Christ in the Mass. So, he left for a  time being offended by the lowering of our mass. I take no offense. You had to know Dan; he was shall we say “tenacious” in his views. Eventually, he came back.

His tenacity was also evident in his politics which he openly shared. He was a self proclaimed  Liberal Democrat of the type that Lyndon Johnson represented. He was a big supporter of the ACLU and if you did not like it – tough! He would argue his positions vehemently and he knew absolutely that he was right. That was part of the Dan package. He could still love you and care about you if you were a conservative but he would not back down and would not give an inch politically. That was Dan.

Fr. Dan helped to shape what St. Anna’s as it is today. He was all about Gay marriage, he was an avid supporter of Unions and he, in the early days, helped to fund a youth program for inner city kids at St. Anna’s. It was this spirit of social justice that took root not only in myself but in his enthusiastic supporting role for several members of the church who volunteered to do this work. So, the DNA of justice and action took root in our church before Katrina and because of that ethos it blossomed after Katrina. Dan played no small part in that evolution.

Dan road a motorcycle and would travel annually up to the Mid-west to visit his family and stay connected with his roots in Illinois and Indiana. He was a consummate Mid Westerner in so many ways. I would see him hop on his road hog in his leathers and take to the road. He loved his motor cycle riding. He loved a lot of things that gave him pleasure and thrills. Motor cycle riding was only one of them.

Dan loved food! Don’t we all. But he sought out the best. Feeling sorry for the poor new rector of St. Anna’s he decided that Vicki, my wife and I, had to join him once a month for dinner. Not only that, but he decided that we had to spend an entire year eating at the listed Top Ten Restaurants in New Orleans and he would buy. It was, at first a bit embarrassing, but he had a way of making it all seem OK. No pressure just friends rating and critiquing the fare. That was Dan.

Dan could be quite private rarely disclosing his inner most feelings. I do know that before seminary Dan had been a merchant marine. He sailed on cargo ships. Once during a violent storm at sea one of his friends was washed over the side and died. As he told the story one could still see the trauma and hurt in his eyes and upon his features. After that catastrophe he left the sea. That is perhaps as intimate as we got. He was married once but that did not work out – that is all he said. Dan was a private man in many ways. Though he had a deeply empathetic persona. He would feel the pain of others who were in turmoil. All of this: his private nature and his empathy toward others….That was Fr. Dan.

His empathy played out in many ways. He became steadfast friends with some folks generally of his generation. He cared deeply for Louise Bush and they would enjoy Opera together. When Louise was in decline he would visit her regularly. He cared about another older lady, Miss Katie Dreher, who was essentially a cripple due to ageing. He would literally lifter her and put her into his car and bring her to church. He would do this for others, from time to time, as well.  He befriended Mary Dodwell and they would go Mall walking together and later strolls through the neighborhood. Mary’s husband Fr. Bob Dodwell had been at Seabury Western Seminary as a Senior when Dan entered as a Junior. That was all it took for Mary and Dan to build a deep kinship. He also found himself, because of his infectious personality, surrounded by a small cohort of deeply faithful friends. That is a measure of who Dan is.

As Dan’s health declined five friends surrounded him. Dotty and Mary who had his powers of attorney but more, loved him and wanted to do what was right for him. Mary’s niece, Kelly who is a Social Worker by training but more, loved Fr. Dan. Ken Rayes  and Denise Michelet who had been deep friends with Louise and became deep friends with Fr. Dan. They served our friend Dan so well for the past year. They attended to virtually his every need. They were his care team. I should also mention Br. Don who over a year’s time would bring communion to Dan as he was shut in. It was Fr. Dan’s persona that elicited such loyalty, generosity, and love. That was the package that you got with Fr. Daniel B. Hanna. May light perpetual shine upon him; his relationship and devotion to us will never be forgotten. Rest well my friend, you will be refreshed.