Our little church is hard to describe. But, let it simply suffice to say that it is quixotic. We strive for diversity in all that we do. When diversity is birthed it looks a bit odd to some church goers. But to anyone who engages in such an oddity will, usually, come away changed, energized, and even perhaps with an epiphany. That epiphany is the real realization of the depth of our giving hearts when the most diverse people gather together. What is perhaps even more relevant and moving is the degree of gratitude some groups experience when invited to the table. 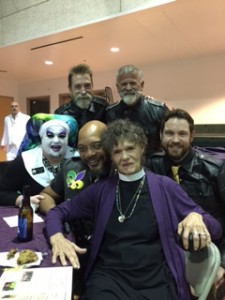 Here is The Rev. Mother Minka Sprague (Chapel of the Holy Spirit) delightfully surrounded by members of The Lord’s of Leather and Big Easy Sisters of Perpetual Indulgence! Surely this cannot be a church function?! By invitation these representatives of “the community (LGBTQ)” joined us for our Annual fund raiser. That fund raiser was to help foster knowledge of the work of Anna’s Place NOLA (www.annasplacenola.org )and to raise monies for the restoration of its future home The Dodwell House ( www.dodwellhouse.org ). In addition several other prominent members of “the community” joined us including Rip and Marsha of The Ambush publications, local pub owner Paul, and of course our MC for the evening Elizabeth Bouvier (performer) and Tony Leggio. Such diversity is a hard won victory for a church. It requires time and a presence in the community. For several years St. Anna’s has cultivated relationships with these groups via fund raisers at bars, toy drives for the kids at bars, and yes Easter Baskets for Anna’s Place kids (at bars). After several years St. Anna’s became a part of the neighborhood and a part of this loving community. It does look different to some yet the gift of their presence is remarkable considering the damage done over centuries by the “Christian” church. But, we are here and they joined us and they are now a part of the work that Christ has given us to do. Sublime.

But the crowd that gathered was not only part of “the community” it represented a wide range of community members. Our 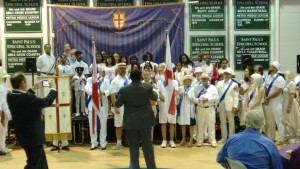 Anna’s Place NOLA choir sang with a dozen of our great kids performing pieces from Oliver and other classics. Some of these kids are in terrible circumstances and live life with violence, malnutrition, lousy schools, and trauma all around them. About 90% of our kids have witnessed or been close to murders and beatings. Stuff no child should endure. So, here they were singing and seeing the possibilities of a future beyond guns, drugs, and violence. They saw revelry and they experienced an invitation to be part of something that they otherwise could never imagine. They understood that they mattered and that their lives and hearts are precious and of great value. Such treatment and such attention is a starting point to end violence. During this performance a group of mostly Uptown folk vested in “buffoonery and pageantry” joined the evening via The Society of St. George de lis, which hosts a toast and celebration of the Queen’s Birthday (that would be Queen Elizabeth II) and so diversity is a key and what we all experienced was sublime.

Will Smith was murdered this past week and such brought attention, once again, to our beloved but violent city. I hate to say it but, even though murders are down we still murder people at twice the rate of Chicago and Detroit (so an expert says). As I said, our kids are raised in such a violent environment that they know first hand murder and beatings. Will Smith’s death was needles. The escalations that happen that lead to violence are part of our daily fabric of life. We live with the tension that a wrong look, cutting someone off at a traffic light, or a mere fender bender may lead to a gun and violent rage. I believe that rage sits just below the surface in much our community and that community lives with poverty. That poverty is both economic and spiritual. As a reminder of the human loss to all of us our little church has the now well known Murder Board and Victims of Violence Memorial Wall. Just before our gala CNN and Channel 4 News arrived for interviews and shots of “The Murder Board.” A CNN written internet report captioned the headline as: New Orleans violence ‘beyond the pale or reason and sanity’ by Elliot McLaughlin (https://www.cnn.com/2016/04/18/us/new-orleans-will-smith-causes-of-violence/index.html). Yes, I said that and more. One word, poignant.

I was moved and indeed impressed to find out that our Mayor Mitch Landrieu has his own “murder board” and it lists all of the violent deaths in the city along with photos of each victim. I believe that the Mayor does have a deep and abiding faith and a deep and abiding sadness with each death. I know that he attends many of the funerals and as mayor takes most of the heat for a cultural and social phenomena that we have yet to figure out how to comprehensively address. With all of the notice given to Will Smith’s murder others went unnoticed. That is more than a shame it is a sin when we, as a broader community, turn our hearts to stone and think of ways to avoid the reality of young deaths taking place all too often. And over what, “respect?” So the murder board stands as a reminder of the great human loss.

Once asked what good the Murder Board does I could only respond, “it changes people, it makes them take notice of the humanity that is lost.” That may seem small but it is big. It begins to be a catalyst. Just yesterday, Sunday, there was a “Second Line” in front of church. It was big and had a couple of bands leading. There must have been 150 people dancing away down the street. Perhaps the real purpose of Second Lines have lost there purpose. That said, dozens upon dozens noticed the board and when they did they pulled up and stopped. Not only did they stop but they approached.  Those dozens of parade folk started pointing to names, I assume of family or friends, and taking pictures and standing in awe. So, yes, the Murder Board does something. It is poignant.

There was something very wrong, just a felling, about the Will Smith ‘Second Line.’ A couple of folks I know felt the same way. It seemed almost like a side show. Yes, I know, “that’s how we do it in New Orleans.” But have we lost the faith part. The ‘first line’ was a dirge played on the way to the cemetery. After the funeral the band would strike up with joy that the deceased had risen and was, as the old hymn says, ‘glory bound.’ There was a real context there. Something about the Will Smith second line just did not feel right, at least to me and few others. Not it did not glorify violence, in fact, it was used by some to call for peace. but at times I think a time of quiet reflection and mourn is very appropriate particularly in light of the constant stream of violence and needless violence at that. Perhaps a time of poignancy…perhaps.

I hope that you have managed to get this far and seen how we are a community of communities and the linkages are deep and often subtle yet solidly there. Those linkages need to be celebrated, enhanced and honored. To be a Christian is to do the work that Christ has given us to do and that means to show so much respect and dignity to all of God’s creatures that murder can not be imagined, that children who are on the margins can be celebrated and supported, and that people of all stripes can find a place at the Eucharistic banquet that says, “love one another as I have loved you.”