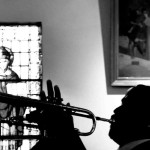 THE photo to the left was taken by Eliot Kamenitz and it is the kind of photo he loves to take. It was a great jazz mass at St. Augustine’s in the Tremé . Yet, he was called from the story and sent to the French Quarter to cover the death of a horse pulling a cart; sadness. Then he was called to cover a story of a child age 9 shot in the East by cross fire; sadness and anger.  Just moments ago he posted that a 2 year old was shot and killed in Central City; sadness, anger, and overwhelmed! Eliot laid this out on Facebook; a kind of visual-cryptic soliloquy for his day. Some of the ensuing posts asked where the shooting was. True that may be notable BUT it is far more touching to be outraged where ever a life is taken. That is what, I believe, the point of “love thy neighbor as thy self” irrespective of location means. Life in our city.

Today at church a young man aged 9 named Bradly and his sister Tyroneka showed up. They come from Central City next door to a famous shooting earlier in the year. Like every Sunday young Bradly looked up and handed me a crumpled dollar saying, “this is for Jesus.” Touching. Then Bradly, like most 9 year old kids asked, “Is there really a Santa?” The eternally tough question for ‘grown ups.’ Then once satisfied that he was not going to be teased about Santa he said, “I know why some of the children don’t get presents – he must have gone to jail.” Think about that for a moment. It’s his life….care givers and parents commonly go to jail; poignant.  Bradly and Tyroneka then served at the altar and it was good.

After mass, as I greet visitors and members, a lady came to me in tears. Her daughter suffering from bi-polar disorder was lost two days ago and then found yesterday. Her tears expressed her pain about her daughters condition and her joy at finding her and having her in safety. Earlier before mass another lady shared that her children had turned on her and hurt her deeply and that now she is making a new life with her husband at age 72. Her gift was cooking for the children of the Tremé with Anna’s Arts program. She felt so needed and wanted when a little one hugged her and called her Grandma. She, like all of us, wants to be needed and loved and like the song says, “[she] just needs someone to love.”

A Sunday in the life of our city must include a Saints game. Today it was the Vikings and a solid win (42-20). You can’t help but feel good. For so many of us we remember ‘The Aints’ and paper bags. What a wonderful story since Katrina visited us – what good guys! What a team that plays like a team! I honestly think Drew Brees is the real deal old time sports hero – what a good guy! And he’s a Saint! A slice of  life in New Orleans that is good. Maybe like the Saints we can learn to play on the same team.

On any given Sunday somewhere a mother is reunited; a shoved aside person is embraced; incense fills our church; a child offers a touching observation; a musician plays and sings; carriages are pulled; someone dies; someone is hurt; food is eaten in fine places and poor places – most of it pretty good. Its just that some Sundays are like Palm Sundays filled with irony and poignancy. This is one of them – the 4th Sunday in Advent, December 18, 2011. God bless you Eliot, Bradly and Tyroneka, the two ladies, Joseph the thurifer…and children hurt by hate – even unto death. The deaths have got to stop; the incense and prayers of the people increase; and we need to be on the same team. God bless us one and all.