This is an Open Letter of Thanks sent to the Episcopal Clergy of New Orleans on 11/21/2011 addressing acts of desecration that occurred on 11/17/2011. 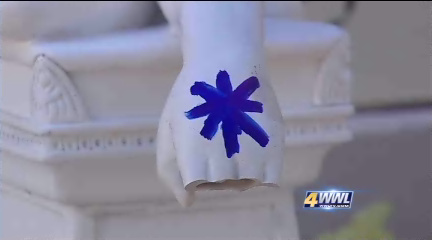 As some may know St. Anna’s experienced an act of hatred and desecration recently. Swastikas were drawn on holy cards and arrayed in our prayer chapel aka Narthex in an Aryan Nation Symbol. A little Angel on our Victims of Violence Memorial was defaced with an Aryan Nation symbol and her hand broken. The damage is not permanent nor physically significant but the act was. While it was mostly symbolic it is profoundly disturbing and I am even now learning just how disturbing it is. I just visited with Rabbi Cohen of Temple Sinai who drove here to give us support. During the course of conversation he pointed out just how significant this is act is to the Jewish community in that symbols of Nazi hatred surfaced at precisely the time when Jews recall Kristallnacht (for those unfamiliar with those nights of November 9 & 10 1938. Kristallnacht can rightfully be said to be the formal start of the pogroms seeking to exterminate European Jewry. As history points out once that door opened then began the systematic sterilization of Gay men and women and concentration camps; the imprisonment and extermination of Romani peoples (aka Gypsies); Poles and the list goes on. Rabbi Cohen shared with me that in some ways the people said, in 1938 “surely this is isolated and will pass.” What is so disturbing to me this afternoon is, have we come so far that we have forgotten? Have we, maybe I, become so insulated from this part of history that it lacks profound meaning? Then to what do we say about ourselves and the murders in New Orleans, is it so much a part of our culture, have we come so far with this that we say, “surely this is isolated and will pass.” I have been very careful to say that this is not graffiti it is desecration – I thank Rabbi Cohen for making this important for the right reasons. What gives me great hope and is so humbling is the out pouring of good will, prayers, and support that St. Anna’s is receiving. Police Officers are disturbed, not just doing their jobs; Congressman Cedric Richmond is sending a donation to restore and improve the Victims Memorial, Temple Sinai has made a donation to do the same, people who are not members have expressed sorrow; Deacon Jay Albert of St. Paul’s stopped by to offer help and comfort. As I said, the damage was symbolic more than anything. At first I thought, “my this is a tempest in a tea pot.” Now I know it isn’t – it is important. I will end the editorial with this. When Vicki and I visited Dachau two years ago – toward the back of the camp is a large granite sarcophagus with the remains of unknown prisoners. There is no eternal flame nor great bronze monolith but simply this carved in the stone: “Forgive but never forget” in German, Russian, Hebrew, English and French.